Big picture: prices per barrel of oil are artificially low due to the US’s oversupply and sanctions on Venezuela, in addition to questions about the credibility of the Organisation for Petroleum Exporting Countries (OPEC). The primary role of OPEC is to coordinate the demand and supply of petroleum products in a commensurate manner across all affiliating geographies. US supplies have placed downward pressure on the forecasted oil price of around $75 to $70 into June-July in OPEC’s baseline forecasts compared with the current $60 to $68 mark. Non-members of OPEC tend to adhere to OPEC’s recommendations because they provide mutually agreeable terms for long-term sustainability, asset utilization and value. While the supply is genuinely due to US surplus, it is artificial because it is outside of a global political economy and may induce peculiar market effects.

In the South African context, the Monetary Policy Committee aims to hike rates over the long-term along with global trends into a repo rate of 7% by 2021. However, their assumptions for crude oil prices went from a generous $75/b to $62-$65/b in 2019. This follows the artificiality of the crude oil market at this point.  Even though the Rand might strengthen against the Dollar, an increase in US oil exports bump up their balance of payments and structurally reinforce the Dollar. In SA, our Rand remains exposed on a fundamental level—politics aside. Petrol prices are expected to hike back nearly as high as the R 17/l we should be paying to build reserves and contain volatility, but the estimated rate of change only shows us that we’re heading back toward where we started. 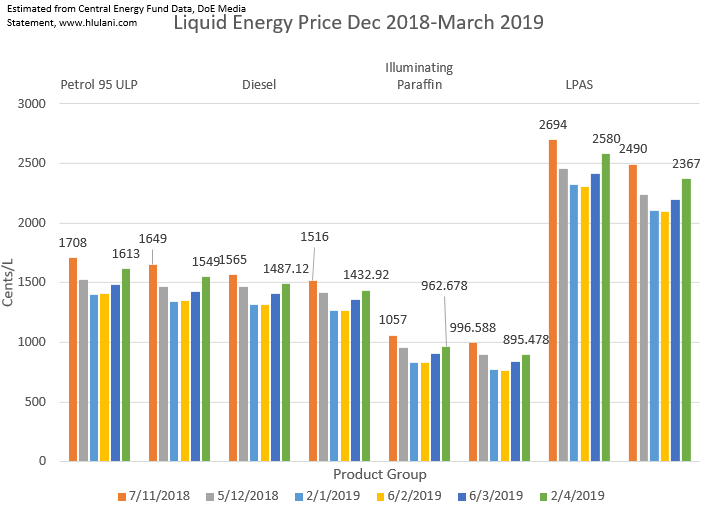 Based on the Department of Energy’s media statement here are the worst price estimations I could make:

According to the Central Energy Fund, changes in the Fuel Levy and the Road Accident Fund Levy are increasing by 4.5% and 3%, respectively. If March price structures are anything to go by the levies account for a contribution to the basic fuel price change of 2% and 3% for petrol and diesel, respectively. Zone differential for Gauteng increase by 11% for diesel and petrol to about 57.4c from 51c, and 22.6% for illuminating paraffin which is up to 70.4c. 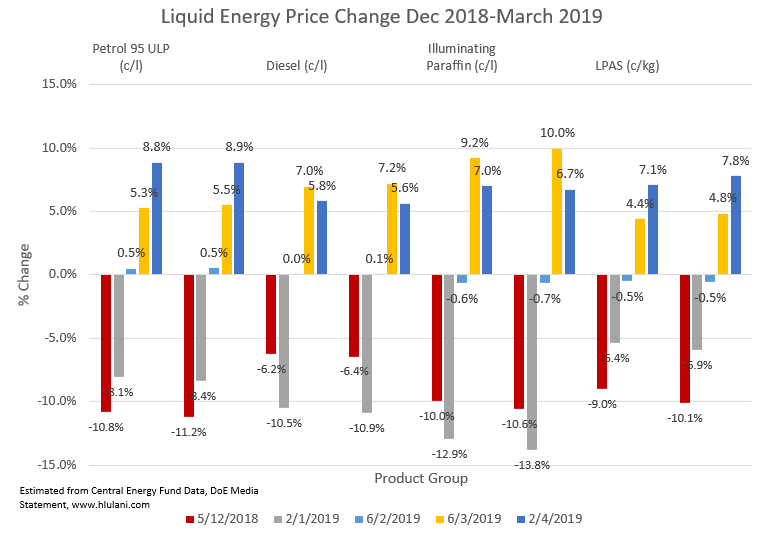 How real is the change? While December 2018 was a good season with petrol price dips followed by more dips in January, both of these had some red-flags. This time around petrol prices rose by 0.5% in February, then little over 5% in March and now they’re increasing by 8.8% in April. That adds up to less than 15% cumulative increases but we could be 3% short from reaching those terrible periods in which the petrol price hit R17.00/b. This could have been avoided. Instead of relying on this volatility to dictate the future of SA energy prices and related costs, we could focus our energy on building reserves and diversifying transportation modes and their inherent energy sources for freight and passenger movement. While new taxes will kick in to the emissions economy soon, and the concomitant changes in the basic fuel price structure also en-route a new journey of assumptions needs to be mapped. Although the MPC will only meet in May 2019, the reactive nature of their assumptions might pose a risk to the fundamentals. Nevertheless, we could have kept prices terribly high when December 2018 dips emerged, contained the difference and leveraged it against the volatility over the next 6 months or so. Instead, we took a milder approach which limits our ability to offset the possibility of prices leaning toward an $80/b, weak Rand, strengthened Dollar scenario. There’s not much reason to sulk because we’re still doing exactly what we did last time: reacting instead of preserving.