Aviation’s role as a catalyst to development pushes investment costs high in the short term but the unit cost of value decreases over time—if not immediately.  In other words, countries and companies expect short term investment costs to be high. Not all nations have companies, and middle-classes with sufficient networks and access to capital to pursue, establish and run aviation industries and this is where government intervention is crucial. On the other side, the general expectation is that while the unit cost is very high (i.e. cost per km of runway, per square km of airport, per aircraft, per pilot), the long term value added is not only high but can be difficult to measure because it requires imagining Johannesburg without Oliver Tambo International Airport, or South Africa without South African Airways (SAA).

The truth is aviation as a sector can be ultra-profit and enable rapid development when towns, cities and airports are logistically and industrially aligned. The Gross Value Added (GVA) by aviation in South Africa was $ 3bn directly and $12 billion in total in 2014, with direct jobs totalling to 70 000 jobs direct jobs against a total 490 000 jobs (dominated by tourism sector employment at 230 000—which was equivalent to the total jobs it sustained in 2013). Airports Company South Africa’s Aviation Barometer reveals a fluctuating growth in departures and arrivals for domestic, regional and international passenger traffic on a year-on-year basis. The broader and unmeasured economic impact on regional mobility as incomes increase remains unaccounted for because of the nature of the aviation sector and the relationship between airports and airlines.

South Africa has not leveraged effectively on the African travel economy for both passenger and freight transport, and the lack of strong networks between major and minor regions imposes a risk in the face of the emerging industrial giant. Especially in the face of ever increasing Available Freight Kilometers in African airlines, it is become more an more clear that there is a gap in the movement of freight through aviation. Airlines depend on thin margins, madly loss making, while making money, getting in debt to buy the best and newest aircrafts and service technology or even not branding stationary just to save costs– all for competitive edging. In Stephen Holloway’s words:

“By the end of 2005 the US airline industry had, according to the Air Transport Association made a cumulative net loss of US$16.8 billion since 1947. Clearly, the airlines most responsible for this performance have had to endure considerable strain on the balance sheets, many entered Chapter 11 bankruptcy protection, some on more than one occasion and several have been liquidated.”

It is easy to quote the performance of some airlines and their profits, but the strategic political and economic complexity of achieving increasing revenues, lower costs, no labour tensions, and high quality service is much harder than headlines utter. The airline business is not a chocolate factory, nor is it a rail transport entity– it is both a political instrument in the global sphere, and a catalyst for development in the regional sphere– especially in Africa. While South African Airways (SAA) seems to dominate the network distance and passenger volume shares due to the feeder Mango—without it it would only have 35% of the market instead of 56%. It also dominates in terms of having become a recipient of substantially more bail-outs, not only due to the sheer scale of the business with relatively constant revenues of just above R 30bn, but significantly lower asset base with a growing liability infrastructure according to the Financial and Fiscal Commission. What I will not do is place emphasis on the amount and cumulative value of the bail-outs to SAA because that actually requires more than simply copying and pasting numbers from balance National Expenditure Budget Sheets[1].

Two institutional views for SAA are that (1) the airline operations market and the airport market in SA need to be aligned in a manner that enables development and complementarity—not simply competition and growth. And (2) SAA needs to play the role of aviation catalyst over an airline in order to leverage on whatever assets remain while putting liabilities to use in the catalytic market.

State Owned Enterprises in the transport sector should operate within a consistent regulatory framework. In the Passenger Rail Agency South Africa, and Transnet Limited, and the South African Roads Agency Limited the asset base for these SOEs is clearly between the operations and the ports. That is to say, that there is a unitary ownership about owning the port (which is where access is from) and the operations (which is where mobility takes place). The policy position toward SAA, in the Domestic Aviation Policy is against SAA receiving special treatment in the country the national carrier represents, particularly because this may be anti-competitive—unless if the airline is incentivized to be an enabler of economic development along routes that other airlines cannot serve viably.  SAA was certainly a non-core business of Transnet, because Transnet had no access to the ports upon which aircrafts, and aviation businesses operate and land. This is not a good value proposition, for an SOE that is not only exposed to poor management behaviour and incentives, but also to a non-welfare creating function to offset the bail-out narrative against it.

“R.28 All operators should be treated equally with regard to access to state-owned aviation infrastructure such as airports and airport facilities, on the land side as well as on the air-side. This should also apply where the infrastructure is owned by a private company win which the state holds the majority of shares, or where an airport which is currently public owned, is privatised unless explicit provision is made otherwise.” 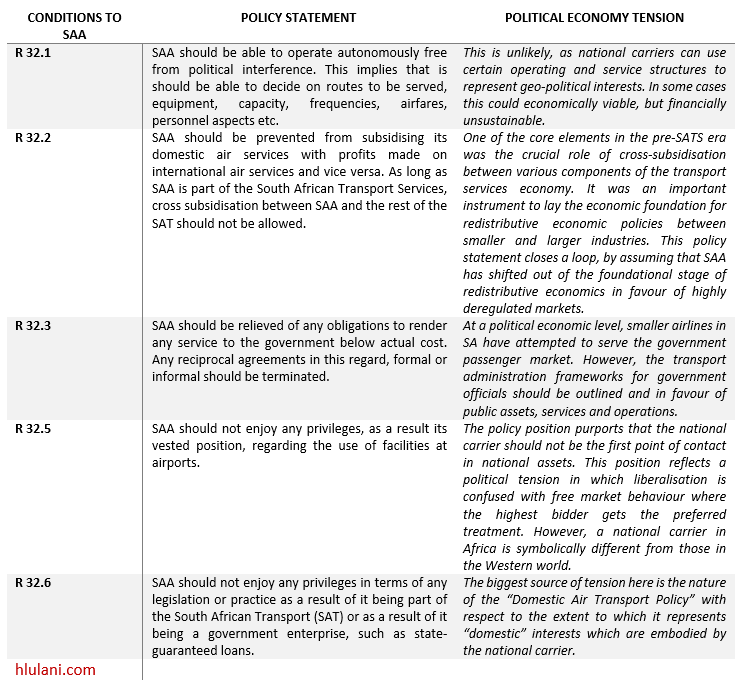 [1] There is a need for a shift in both treasury and SAAs thinking about and around bailouts: these bailouts are built with certain conditions that tend to be aligned with the entity’s goals assuming that they correct problems. Now, when the same correction approach is applied repeatedly and it does not work what is the punishment instrument?

The other issue is that privatization is very different from concessioning certain parts of the airline through public private partnerships. Privatisation is a quick fix, with big money and low value for Western countries and could work very well. Not only because Western economies already have the technology, technical and industrial capacity to buy-in and act on the market, but also because they do not have to deal with the cumulative costs of colonial systems[1]. Although it comes at the cost of labour and exposes the airline to risks at the scale similar to Air France (which cannot be solvent now due to a pilot strike) which have more to do with nationhood and management schemes over business. Even the direction ya business rescue is fundamentally oriented around understanding the national carrier’s value chain, as such exposing various aspects related to national commercial intelligence—which is an asset that can and will expose the national carrier to even more risks.

Taking the route of privatisation would be inconsistent with the Yamousskrou declaration and decision because African nations are responsible for protecting their aviation markets—which SA signed. The policy argues that African states must not only protect their airlines as a collective, but must also develop them as legacy assets through integrated technology, marketing, policy and institutional infrastructure. Once SAA goes private, SA will not be in a position to become part of the civil aviation revolution outside of the airport sector, and it will open itself up even more to, short-run efficiencies offered by international carriers but long-run losses to the nation from a welfare gains perspective.

In the form of concessions, or platforms, if not a development corporation—SAA could take on a different direction compared to other airlines in Africa which tend to be preoccupied with retrofitting international approaches to African problems. Yes, a multi-tier concession scheme with various business development and education paradigms is difficult to structure, but it would serve the much needed education, employment and business needs. This approach could enable small-medium and completely new businesses to emerge in the aviation industry, that will be forced to work on an advanced and highly competitive level with SAA as the catalytic platform. Immediately relieving the debt, and sacking the bail-out, no—it will not do that. What such an approach could enable is a focused place for aviation investment, development and industrialization this will put SAA at a significant advantage against other national carriers: which are simply airlines, not carriers of a nation.

In this way, SA can effectively ride the wave of liberalising aviation, open skies and the Single Air Transport Market in Africa—which in itself, is a massive long term catalyst. The conversation around imitating commercial behaviour of other countries without building the right institutional, industrial, intellectual and social infrastructure around these behaviours is a hindrance to Africa’s development. Many leaders do this by citing Switzerland, European Union, United Kingdom, Russia, China  or other nations that are in no way close to similar to SA historically, industrially nor systematically—such mistakes should not be perpetuated further. This is a hard approach to take because it involves Education and Training Authorities, TVETS and Higher Education all geared up and aligned toward achieving national objectives—not the current strategic approach[2].

At this point, the “bailout” should not bail the entity out any more than it enables reform. What we must stop thinking about is the short sighted idea that SAA is an airline. It should be reformed to be a Civil Aviation Catalyst through changes in management, policies and institutional practices. This reform process will be hard, but it will enable access to civil aviation to smaller enterprises, airports in towns and cities alike. In this way, the bailout does not become an injection into a bad business model— no. It becomes a gateway to initiating a practical solution, and broadens the narrative behind an equity conversation.

[1] See for example the demands by Comair Limited—a company that holds Kulula and British Airways. They demanded from a South African government that before government chooses to invest in SAA it must consult all stakeholders. Funding allocation must be within the Domestic Aviation Transport Policy (which also includes the White Paper on Civil Aviation), the same policy which barricades preferential treatment of a national carrier in a country that has only not been under a racially segregated regime for less than a quarter of a century. These two arguments are more control mechanisms than they are competitive practice mechanisms.

[2] The current turnaround strategy is focused on developing suitable competencies through training and other management — institutional improvements should be in place to follow this. An alignment between SOE development and Governance needs to be in place.

#221 The taxi strike is not over, but stranded

#220 South African Airways: Where are the performance targets?

#217 Good quality policies, planning and wealth creation: a roadmap for the taxi industry

#216 Youthful transport explorations: stick to being on the receiving end