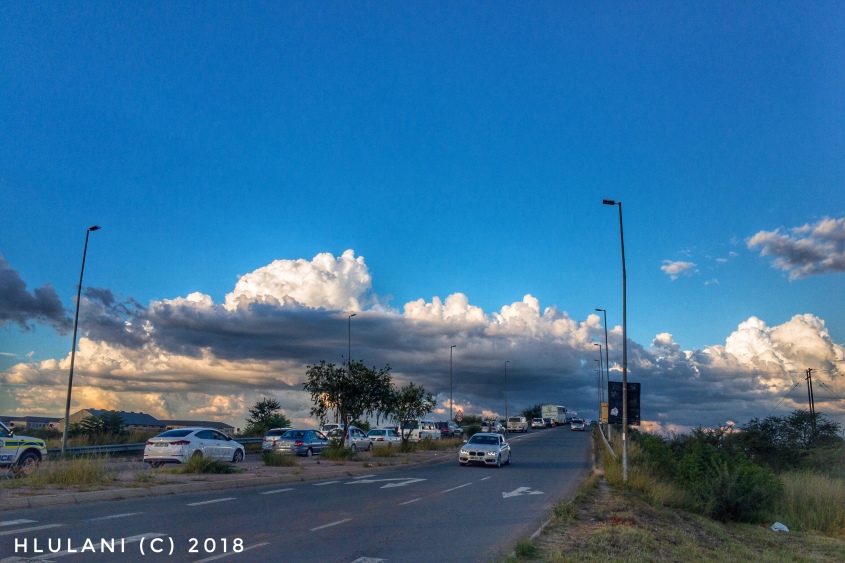 MAHIKENG TRAFFIC— On the rise and hurting commuters and private car users alike, traffic congestion in small towns is becoming a reality. Very different from urban congestion where cities inhale residents between ‘townships’ and business districts: towns rotate patches of poor planning, traditional land and rapid development. It might not be obvious to many, but there’s substantial room to curb congestion not through increasing road capacity but through expanding the roadways in accordance with the new National Roads Policy. Roadways are not just about the road— which is the black tarmac. They are also about ways through which people innovatively move through space. From walking, to cycling to trolley pushing and cargo cycling. This picture shows in many ways how close my 2014 forecasts were of traffic congestion in Mahikeng along certain corridors (roads). This one in particular, along Sekame leading to Nelson Mandela is a stretch that holds a growing boarding school; shopping complex; government building; hotel and industries. All of which are facing the second most dense settlement in Mahikeng, which is Signal Hill— a traditional settlement with big, small and medium sized houses and industries all clustered around arterial tarmac and gravel secondary and tertiary roads. A crises in justice, yes, but there seems to be some allocations for roadways in the area.

The time for reactive transport planning is overwhelming out of season, our generation has a lot of energy to draw from.

This bridge will not contain future traffic in my forecasts and there are two other route alternatives, but they too will be heavily congested, causing delays of more than 30 minutes per vehicle during peak hour no later than early 2020.

Even if the congestion lasts for an hour or two, the 30 minutes extra travel time for a 15 minute commute in a small town will affect public transport users the most. Part of my interests is finding ways to develop transport systems that are about choosing the best option, while making public and non-motorized transport very competitive for simple daily trips. With or without technology support, I believe and have seen the possibilities inherent here in towns that now experience congestion. If you’re in a small town and facing the congestion problem no matter how long; talk about it, raise awareness as soon as possible. The time for reactive transport planning is overwhelmingly out of season.

Our generation has a lot of energy to draw from. Preventing traffic congestion in small towns is a serious issue. Towns are a crucial part of restructuring dignities; livelihoods; economies and solving the urban problem.

We need to take transport issues in our towns very seriously before they’re too big.

267 | In transport, private sector participation is not privatisation

265 | A new era of corporatisation for the minibus taxi industry is emerging—will commuters afford it?

264 | Competition Commission recommendations for public transport: timely, useful and out of date

263 | The fuel levies are not enough to fund transport infrastructure, safety and modes

262 | Taxi ranks are worth more than they look